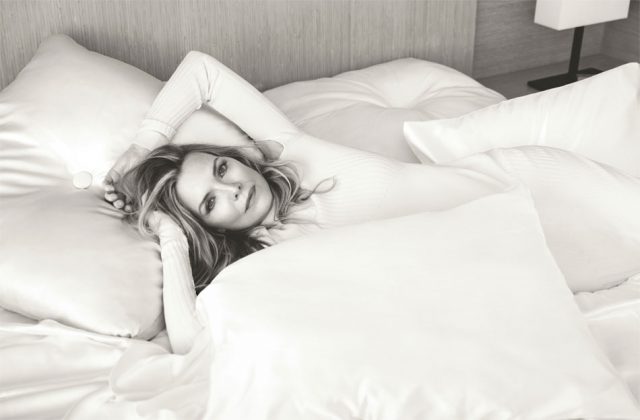 She's starring in big films this year like Mother! and Murder on the Orient Express and people are saying it's a comeback of sorts. I say pffff, if you love Michelle Pfeiffer like I do then you'll agree she hasn't gone anywhere. This is literally true.

When my daughter was born, the first thing I put in her nursery was a framed picture of Michelle from the 80's, photographed by my friend and iconic photographer Guy Webster. Standing in a pastel pink studio, dressed in a Levi's denim jacket and perm, who else better to watch over my little girl? This is the reason why I'm excited about sharing this week's issue of The EDIT in which the normally very private star features on the cover talking about the simple life.

In this issue of Net-A-Porter's digital mag, Pfeiffer sits down with British co-star Olivia Colman to talk about why she hates watching herself on screen, her experiences of working alongside superstar actors, and how certain social situations are like “torture” for her.

In the refreshingly frank, funny and warm conversation with Colman, 59-year-old Pfeiffer revealed that when it comes to her own work, she’s her own toughest critic. “I look back at everything and wish I’d done it differently," she says. Michelle explains that she finds it hard to watch herself because she hones in on her flaws.  "I’ll see a film – which is becoming harder and harder for me – but I’ll see it once it’s finished, then I never watch it again. If I’m scrolling the television and [a film I’m in] is on the guide, I can’t get by it quick enough."

The pair talk openly about how nervous they were working together alongside the all-star cast on Murder on the Orient Express, with Judi Dench, Kenneth Branagh (who directed and starred in the film), Johnny Depp, Penélope Cruz, Willem Dafoe and Josh Gadd, among others. “Working in front of all of you, I found that intimidating. I had to really fight against wanting to play it safe and wanting to impress everyone,” Pfeiffer tells Colman, to which the British actress agrees: “I came away from that job having had the nicest time in the world, but feeling like I’d done one of the worst pieces of acting that I’ve done in a long time because I was slightly overexcited the whole time. And nervous, like, ‘I don’t want them to hate me!’".

Pfeiffer continues by saying on set she found that the more famous a person is, the nicer they were: “In my experience, the more accomplished and, I guess, famous the actor was, the more gracious they were to everyone around them, and the more they went out of their way to put people at ease and make people feel comfortable. Like when I met Judi Dench – she just radiates this warmth,” she tells Colman in the fashion weekly.

Pfeiffer is definitely no newby to the acting game, but there's a reason she has maintained her dignity, grace and loyalty to herself. “I hide. You learn how to move through the world; you become a little like a shark. If you just keep moving, people double take but you’re gone. At the beginning, it really terrified me."

As a lover of the simple life, and peace 'n' quiet, Michelle talks about how much she feared fame when it first came to her. "I remember when the big shift happened for me. I went to Europe and spent time with Cher and Susan Sarandon and while we were away, our film The Witches of Eastwick was released. When I came back, it was just this change, it literally happened overnight. It was terrifying.”

Opening up about suffering from anxiety, Pfeiffer says that many social situations are “torture” for her, and reveals that she felt worried ahead of filming Murder on the Orient Express because she would be stuck on board the train all day with no time to herself: “I was slightly anxious about being trapped on the train all day long. I need to have my own private time and space to gather myself. I can sit for hours just doing nothing, by myself,” says Pfeiffer.

She may have disappeared for a while, and how we missed her. But the woman is back, still a bombshell, and she's here to stay.