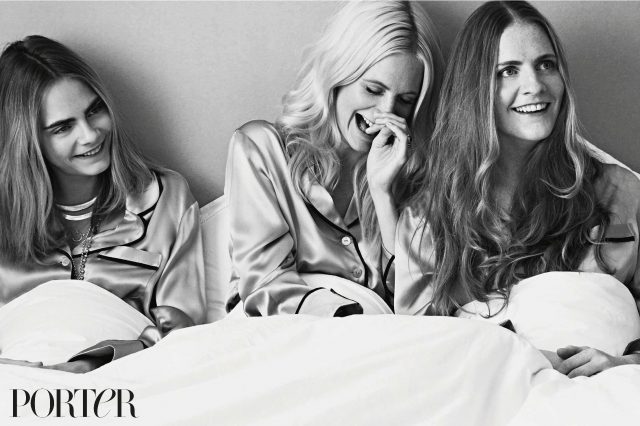 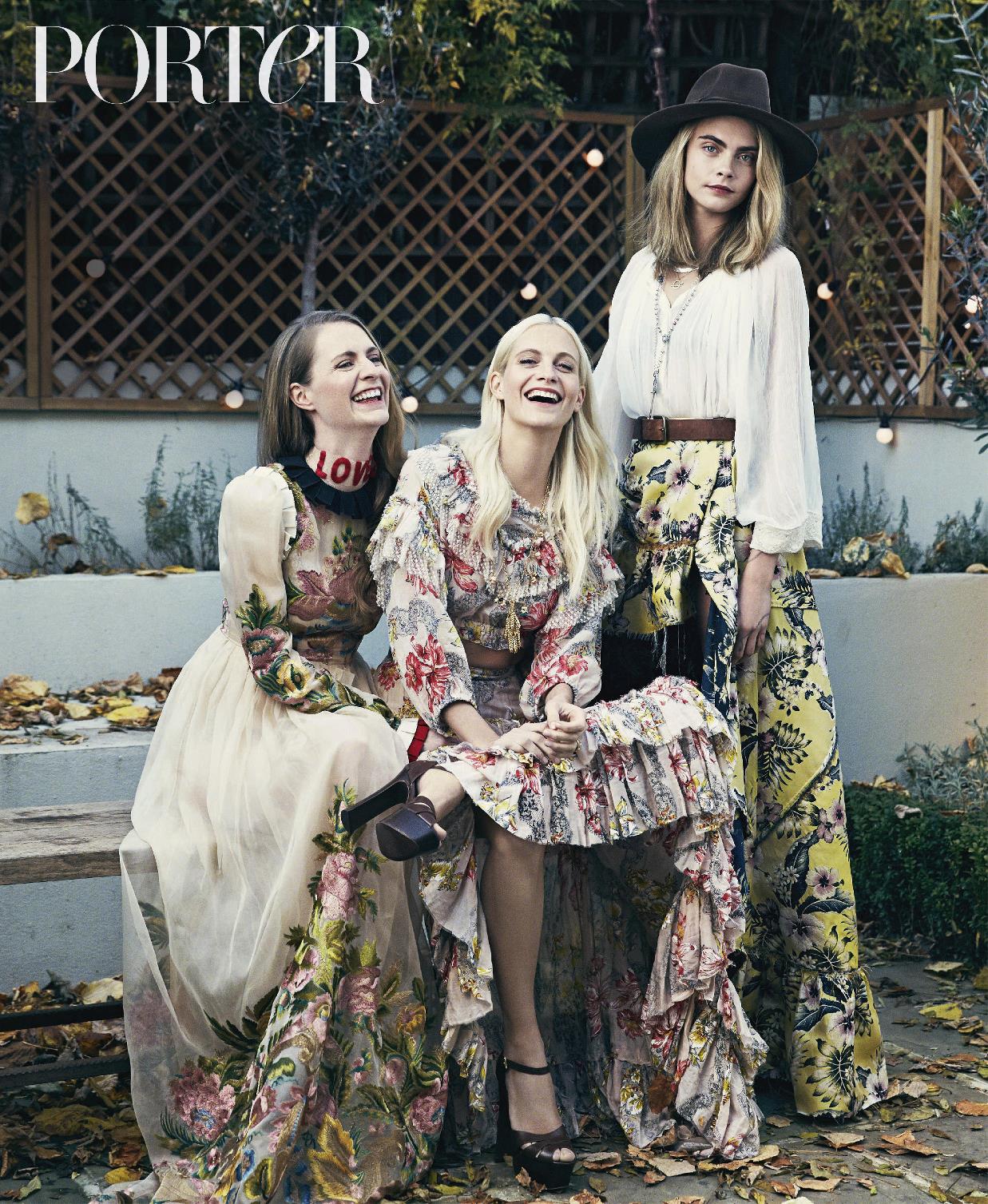 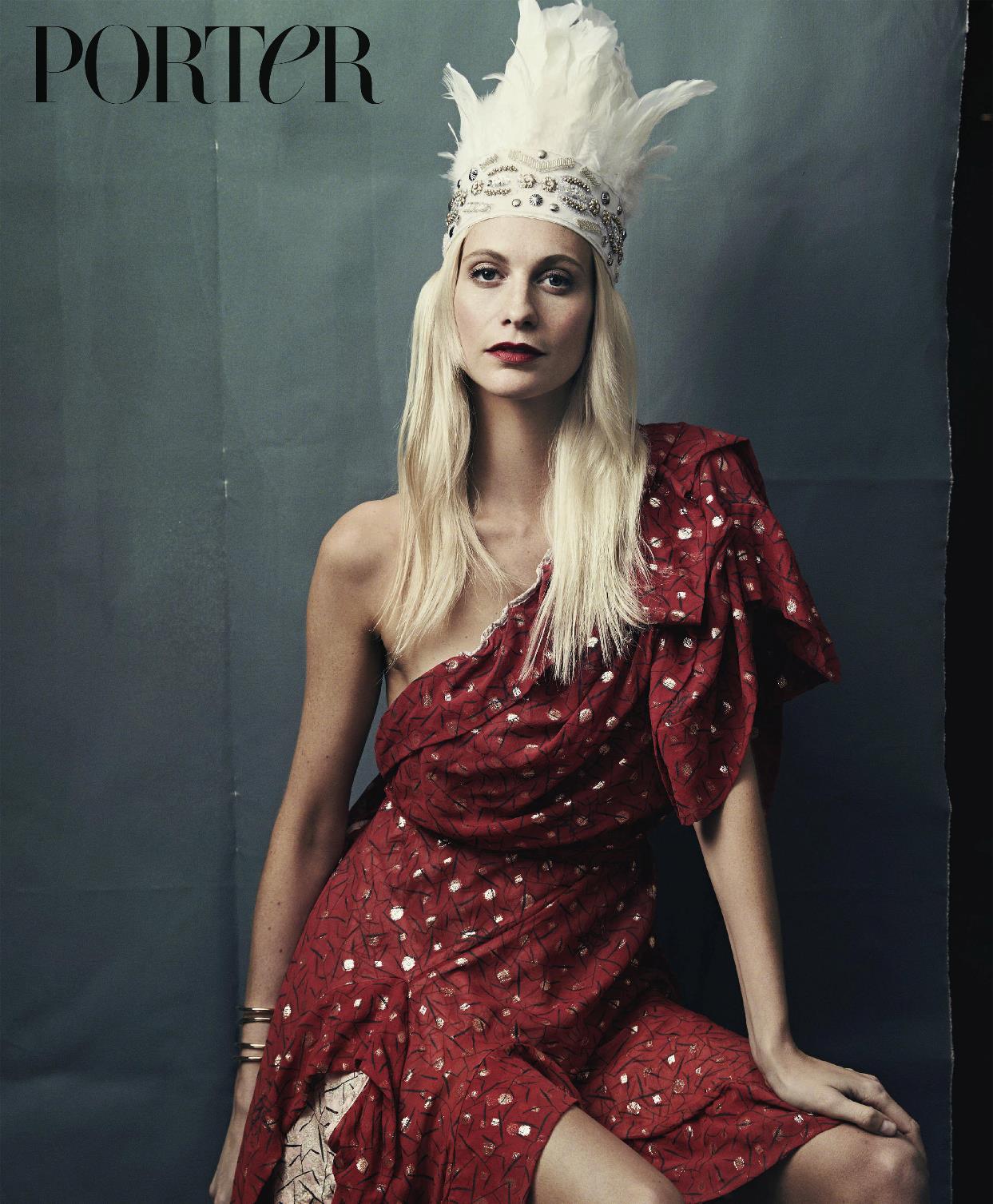 In this, the first ever interview with all three sisters together, the Delevingne trio feature in PORTER’s Spring issue across 14 pages, photographed by Bjorn Iooss and styled by Helen Broadfoot, in a series of photographs that captures the intimacy between them and gives readers an exclusive insight into Poppy’s chic new marital home.

In conversation with PORTER’s Features Director, Vassi Chamberlain, Poppy talks candidly about her “love giver” mother, Pandora, and how witnessing her mother’s struggles taught her an important life lesson. “We have all learned that addiction and mental illnesses are illnesses and I think a lot of people overlook that…it is a chemical imbalance; it’s like cancer, a sickness and people need to see it as that. So when people ask me, ‘Are you angry with your mum?’ I’m like, ‘No there is nothing to be angry about,’” she tells PORTER.

Poppy also credits the relationship between herself, Chloe and Cara as one of the most important reasons for growing up happy: “[Cara] slept in my bed for years…To have each other was just so, so vital,” she tells PORTER. Sisters Chloe and Cara also make a fashionable appearance in PORTER, reinforcing how important the support they give one another is. While Chloe admits, “We are very lucky, the chemistry between us is kind of perfect,” Cara – affectionately dubbed “the little one” by her elder siblings – also proclaims to PORTER, “The best thing about being with them [Poppy and Chloe] is just being with them.”

Poppy reveals that it isn’t just husband “Cookie’s” support that has enabled her to temporarily relocate to LA and pursue her acting career, but also Cara’s unique ability to ‘hustle’ which has inspired her older sister. Poppy tells PORTER, “She is such a doer Cara, she is so ambitious. She has always known what she wants and she’s a hustler. Sometimes I call her and I’m like, you need to help me hustle, and she is like, ‘Come on!’”

There’s no doubt that Poppy’s set to ‘hustle’ her way to stardom and with upcoming roles in Guy Ritchie’s King Arthur: Legend of the Sword and Matthew Vaughn’s Kingsman: The Golden Circle, it looks like 2017 could well be the year of Poppy Delevingne.

Cara on how far she’d go for her siblings:

“Oh my God, it’s incredible to have these two. I don’t know what I would do without them, it would be horrifying. We have been through everything together. They helped bring me up. They taught me my love of music. We used to do dance routines to the Spice Girls, which we still do. I wouldn’t ever want to imagine a world without Poppy and Chloe. Put it this way, if one of them killed someone I would help bury the body.”

Poppy on the type of actress she hopes to become:

“Charlize Theron in Monster…I want to disappear completely into someone else’s skin.”

Poppy on life lessons and a happy family:

“We have all learned that addiction and mental illness are illnesses and I think a lot of people overlook that. What people don’t understand is that it is a chemical imbalance; it’s like a cancer, a sickness and people need to see it as that. So when people ask me, ‘Are you angry with your mum?’ I’m like, ‘No, there is nothing to be angry about.’ We all just want to be there for her. We’ve seen her struggle, she’s so strong for us and is such a love giver and just wants to be loved back, so we all give that to her, and that’s why my parents are still together and so happy.”

Poppy on witnessing her mother’s illness from a young age:

“There were tricky times. I was 12 when it all started happening, which is the time you really need a mum – getting your period, wanting to know what sex is about. Cara was six years younger. She slept in my bed for years. She would literally twine her body around mine when I tried to sleep. To have each other was just so, so vital.”

Poppy on saving babies “for last”:

“You know when you have a roast for Sunday lunch and you save the potatoes till last? ...Well, babies are going to be my roast potatoes and I’m going to have them last.”

Poppy on why her marriage is so solid:

“The wonderful thing about my husband is that we are very good at being independent…We’ve been together for nine years and for the first 12 months I lived in New York. I think a lot of people find that bizarre but it really, truly works for us. We sort of really savor each other when we are together, those moments are so special.”

Poppy on her struggle to break into modeling:

“I was about to give up…I’d been through six months of hard castings and nothing, then that [Anya Hindmarch’s campaign] came along.”

Poppy on her real “hero”:

“Chucky D [her father] is my absolute hero…When James proposed I said one thing you have to realize is my dad will always be my number one.”

Chloe on their natural sisterly bond:

“We all have the same moral guidelines…I would do anything for them. We are very lucky, the chemistry between us is kind of perfect. We have a three-way WhatsApp conversation going pretty much all the time.”

To see the full interview with Poppy, Cara and Chloe Delevingne BUY the latest issue of PORTER MAGAZINE on sale Febuary the 10th, 2017