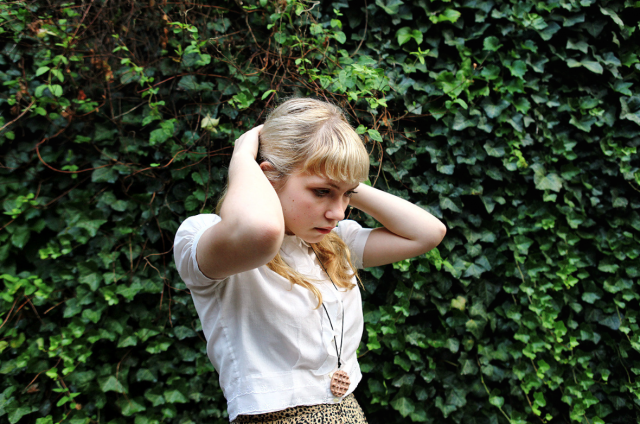 In reaching out to young girls like herself, Ms. Gevinson seems to be positioning Rookie as a kind of antidote to what they are reading elsewhere. In a recent interview with Racked, she criticized one of her competitors, Seventeen magazine: “I feel like if I followed their articles about boys and truly believed it was as important to do certain things or avoid certain things as they say, I would probably go crazy. Sometimes their ‘embarrassing’ stories are literally about boys finding out that you have your period.”

AN hour into her summer of freedom, Tavi Gevinson was stuck somewhere between La Guardia and Degraw Street, inching her way through the rain-soaked traffic in Brooklyn. It was a Monday afternoon in early July, and about 200 teenagers had gathered at Littlefield, the Gowanus performance space, to see the 16-year-old fashion blogger turned online impresario.

“Tavi is on her way — her flight was delayed,” a girl in a floral headband told the expectant crowd, many of them raised on Ms. Gevinson’s offbeat pronouncements over the years (“I strongly feel that daisies are literally the best thing ever”).

In the meantime, the audience of mini fashionistas snacked on cupcakes and listened to readings from Rookie, the online magazine that Ms. Gevinson started last fall. The magazine grew out of Ms. Gevinson’s blog, The Style Rookie, which she started at the ripe age of 11. Writing in a spunky, discerning voice, Ms. Gevinson shared ruminations on everything from Proenza Schouler to gym class, and posted unsmiling self-portraits taken at her home, in Oak Park, Ill

Then, in a whirlwind so sudden it now seems inexorable, Ms. Gevinson became the darling of those she’d revered, like John Galliano, Miuccia Prada and the Mulleavy sisters. Soon she was warping through the celebrity rinse cycle: sitting front row at fashion week, interviewing Rei Kawakubo in Tokyo and drawing praise from Lady Gaga. She even garnered some backlash from old-timers, including a Grazia editor who complained at a Dior show that her bow was blocking the runway.

By the time Teen Vogue named her “the luckiest 13-year-old on the planet,” in 2009, Ms. Gevinson had appeared on the cover of Pop magazine and starred in a video for Rodarte’s Target line. Later, she was profiled by both The New Yorker and The New York Times Magazine. With her thick glasses and dyed blue-gray hair (Tavi was sometimes mistaken for an outré granny), she was a petite tastemaker.

But all little girls grow up, and Ms. Gevinson wasn’t content to remain a novelty. In late 2010, she announced a new project: an online magazine inspired by Sassy, the Nirvana-era teen magazine that folded in 1996. Sassy’s founding editor, Jane Pratt, nurtured the venture, and within six days of its start Rookie broke one million page views.

Rookie has made ample use of Ms. Gevinson’s celebrity cachet, with contributions from Sarah Silverman and Lena Dunham and a cheeky video segment called “Ask a Grown Man,” which has featured Jon Hamm, Paul Rudd and Judd Apatow giving boy advice to teenagers. (To a girl in high school who said she was having trouble finding a boyfriend because she was overweight and “I intimidate boys because I am funny and independent,” Mr. Apatow advised patience. “Cool people will like you for who you are,” he assured her.)